Yes, you did read that right. Brave Auntie Ann arrived in Peru to accompany us for this part of the trip. Paul wasn’t looking forward to Peru at all (he’d been to Lima for work before and was unimpressed), but in fact it’s ended up as one of the most incredible places we’ve ever been. Easy to travel in, fun and with some amazing sites for adults and kids – we couldn’t recommend it more highly.

Two weeks isn’t very long though. If that’s all you’ve got, too (or even if you’ve longer) here are some top tips for wringing the very most out of Peru for adults and kids.

Skip most of Lima: I’m sure it’s lovely – and apparently a foodie capital – but Lima didn’t thrill us much. The weather is foggy and the sites spread out, and it’s just very ‘capital city ish’.

Things we did love

The Peru Hop backpacker bus might seem an odd choice with kids but it was perfect, dropping us off in all of the right places, showing kid-friendly films for the girls and introducing us to ever-glamorous backpackers. I think I may have mythologised these rare beasts too much – Daisy was clearly expecting ‘real backpackers’ to be much more exciting. Turns out millennial gap year students are very clean-cut. The only drugs we saw on the bus were our own Kwells Kids, and no-one was drinking either.

At Arequipa (gateway to Colca) we left the Peru Hop itinerary and struck out alone. We would have liked more time in Arequipa, which is stunning and has a fantastic chocolate café called Cha Chiq (buy their lipbalm, it’s the best), and a hotel called Wayra with a small girl in it who watches endless Peppa Pig (Peppa is perfect for the girls’ Spanish – nice and slow and great vocab). 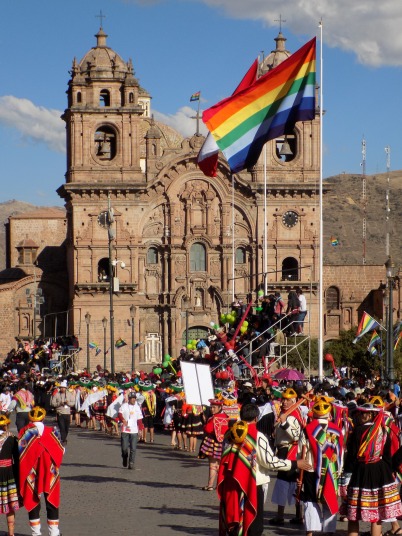 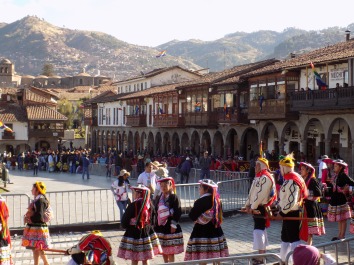 Also (Daisy’s choice this) we visited the frozen mummy museum. She now knows a lot about Inca sacrifice and was particularly struck by the fact that most of the children were about her age – it was ghoulishly fascinating and I am thankful it didn’t cause nightmares. We also very much enjoyed the convent, which is so big it is like a Spanish colonial city in itself.

We took the posh night bus to Cusco with Cruz del Sur (note, this was far too hot, and the serving of hottish meals on buses seems a bad idea, and made Daisy throw up). However, we arrived on time, with just enough sleep.

Cusco and around – family tips

Yes, we went to Machu Picchu. Yes, it was definitely worth it despite the fact we’ve seen many ancient cities. The setting is stunning and the ruins amazing. The girls will tell you it is great for hide and seek. But do take these things into account. 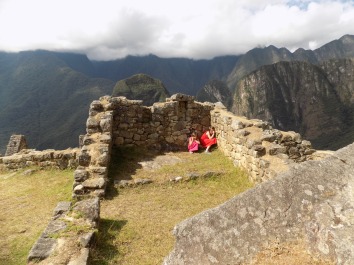 Our final big trip in Peru (have we covered enough yet?) was the ‘posh train’ running from Cusco to Lake Titicaca. This, it turns out, was worth the eyewatering pricetag. You’ll see the countryside in the most beautiful way, it’s really relaxing and the food is FANTASTIC. The girls made a friend, and we enjoyed watching the rest of Peru slip by, stopping at the highest point to take pics and buy even more alpaca tops. Yes, it’s touristy, but it took us where we wanted to go without the usual coach-related nausea. A total treat. 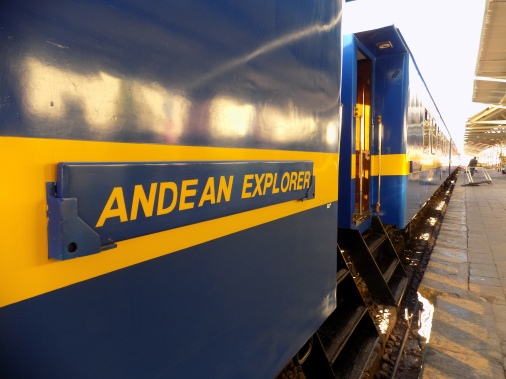 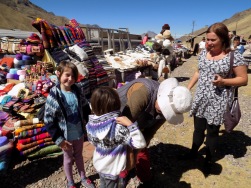 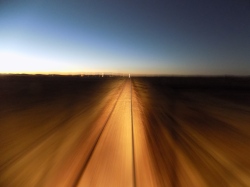 Finally we took a boat out on Titicaca with Ann to the floating reed islands. These are well worth seeing, despite the fact they’re touristy. The people here live on a big mattress of reeds that are constantly replenished from the top as they rot from the bottom. All very sustainable, and surprisingly comfortable. But you will be forced to go on a touristy boat ride and buy some stuff, so have your soles ready. We then left Peru for Bolivia, after saying goodbye to intrepid Auntie Ann – a fantastic travelling companion who we are looking forward to seeing VERY SOON! 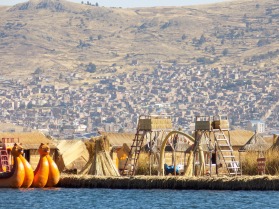