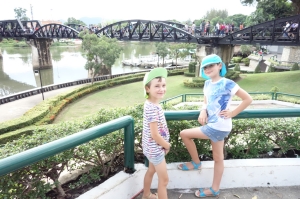 There’s one last thing to do before Mum and Dad leave for home. Dad had expressed a desire to see the Bridge over the River Kwai, and we didn’t have time before heading down to Vietnam from Thailand.

So, back in Bangkok after the flight from Chiang Rai that followed the Laos cruise, we took a (very) local train to Kanchanaburi. 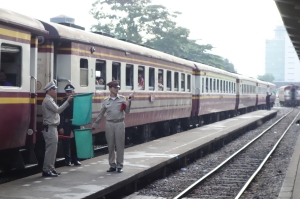 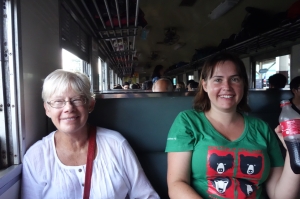 The bridge, made famous by the film of the same name, isn’t over the River Kwai at all, it turns out, but over the river Mae Klung. The Thais though, being an enterprising bunch, decided that it was easier to rename the river after the film than move the bridge – so it remains there, over the ‘Big Kwai’ river. Clever, huh? 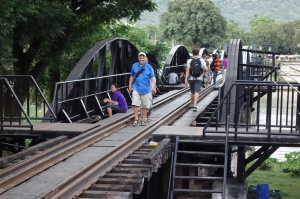 If you don’t know your Second World War history – or your films, the Bridge is part of a railway built by the Japanese during the second part of WWII to transport goods from China through Burma and Thailand. It was built by local forced labour and by prisoners of war. Conditions were horrific and many, many died during the building of the railway, from starvation, malaria and torture. 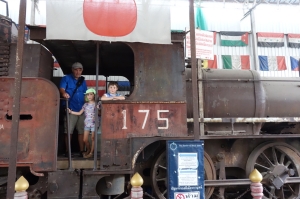 The bridge itself is just part of the story, and makes a slightly depressing monument. We walked across it to the accompaniment of some truly terrible buskers –one bizarrely playing the Harry Potter theme on the violin. Then we turned around and walked back. The girls were baffled.

The nearby museum shed no light since it was basically a collection of old items with labels such as ‘Japanese sewing machine’ or ‘old car’. Scarcely a fitting memorial. 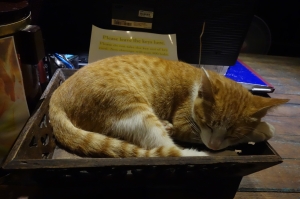 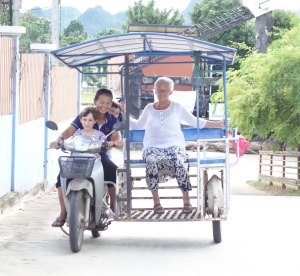 Kanchanaburi does have other charms, it turns out, in the shape of a nice hotel called the Good Times Resort (where we did indeed have a good time, and are grateful to the Coxes for their recommendation). The hotel had a great motorbike taxi, and excellent pie and mash (sometimes the Asian food gets too much, besides I’ve never had my mashed potato served in a banana leaf ‘boat’ before). Oh, and a pool.

So happy were the girls that I was unable to drag them out the next morning to visit the ‘proper’ museum we discovered down the road near the Kanchanaburi war cemeteries. Dad and I went – and it was very moving. Hundreds of thousands of casualties caused by the Japanese need to get the railway done fast, and little care taken of those that built it. The man who built this museum is extraordinary and his obsession and vision for it is immense. We paid our respects at the war graves, thinking of soldiers who died very far from home.

The trip also made me grateful for the existence of the malaria pills in my backpack, which we’re still taking after being in Laos. So grateful that with these and repellent we can mimimise the danger there (and the girls are tolerating paediatric Malarone really well).

One more night in Bangkok followed – this time at the Girl Guide hostel in the centre of town (are you sensing a Girl Guide theme to this trip?), which was surprisingly comfortable. Then we said goodbye to Grandma and Granddad at the airport, hoping we haven’t put them off taking another trip with us in the New Year. Next stop for the Bigmores; the beach!