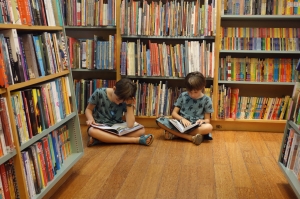 We didn’t mean to go to Malaysia. Nothing personal – it just wasn’t on the list. But you can’t fly directly from Myanmar to Tokyo, so Trailfinders (who have been really helpful with our round-the-world tickets) put in a change in KL instead. Since we were there, we couldn’t resist having a couple of days there.

But this is not a story about the cultural delights of Malaysia, it turns out, it’s a tale about how we spent three days in a shopping mall, and loved every moment.

In our defence, we’re not normally great shoppers – but consider how long we’ve been away. Our clothes are tattered (all those laundries) and unsuitable for the months to come. I’ve seen few brands I really recognise for months (and even when I do it all goes wrong – such as when I thought our hair was getting a bit greasy in Thailand before realising we were washing it in Dove conditioner). 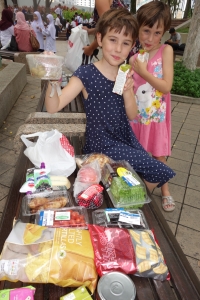 KL was the culture shock of my life, in a good way. We left Myanmar via dilapidated Yangon Airport, where there are two cafés, a few souvenir stalls and a barely working escalator. After a couple of hours we arrived in a bright shiny future –fastforwarding about fifty years. There were baggage carousels with illuminated signs, fingerprint scanners, fast airport trains, and machines that took credit cards. And there were shops.

Oh heavens, how there were shops! Not only stores, but the most British of stores. And so even a family who never sets foot in a shopping mall from one year to the next found themselves totally sucked in.

There was an H&M, and a Uniqlo, and an M&S. Malaysian readers, if you saw a small English lady weeping by the Percy Pigs I do apologise for my uncharacteristic lapse. We bought tights (haven’t had to wear those for a while), and I replaced my long-lost down jacket. Paul bought a laptop. We replaced some phone chargers .

But not only that, we went to the Science museum (still in the shopping mall, right??), feeling only slightly dirty as it is heavily sponsored by Petronas, and all about how brilliant fossil fuels are… However, it is also very childfriendly, and the non-oily bits are brilliant. There was also an amazing exhibition on visual and audio illusions which we all thoroughly enjoyed. 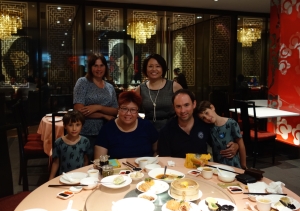 We went to the cinema! We had dim sum with the Malaysian Girl guides. The girls enjoyed a really nice playpark and splashpool in the park outside the mall, as well as the aquarium (nice sharks) and the Petronas Towers (nice views). And we stayed in the loveliest place – a guesthouse called Orange Pekoe, that cost £25 a night for four of us. Highly recommended.

I realise that none of this is very interesting to most of you. You can go to cinemas and shop all the time. And you’d probably prefer to hear that we went to some really cultural parts of KL. We meant to, honest. But I can assure you we are thoroughly rejuvenated, cheered and ready for Tokyo. As ready as you can ever be for Tokyo anyway. Let’s hope our bags don’t get lost in translation. 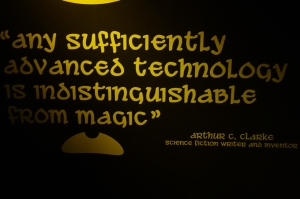